How the Nation is Tackling Food Insecurity

How the Nation is Tackling Food Insecurity 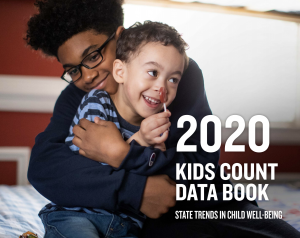 The recently published 2020 KIDS COUNT Data Book by The Annie E. Casey Foundation assesses how children in the United States are doing overall in four different categories: Economic Well-Being, Education, Health, and Family and Community. Although the report only contains data updated to 2018, the findings are still relevant for our current state. Overall, children are faring better in all four indicators, with the only exceptions being a 1% increase from 2010 in children with single-parent families and a .2% increase in low birth-weight babies. However, even though children are faring better holistically, around one in five children in 2018 lived in poverty. A problem with viewing national statistics is that it hides trends within certain communities such as economic or racial groups. As a whole, people of color tend to face greater obstacles to success due to systemic barriers.

As a whole, minority groups of color tend to face greater lack of support needed to prosper than other groups. For example, African American children are more likely to live in single-parent households and neighborhoods with high rates of poverty. Native American children are more likely to live in neighborhoods with limited access to resources and lack health insurance. Latinx children are more likely to be enrolled in school and to live in a family where the head of the household lacks a high school diploma. According to the KIDS COUNT Data Book, “Demographers predict that in 2020, children of color will represent the majority of all US kids.” If people of color are increasing in population, it is also becoming increasingly relevant to provide these children the support they need in order to live comfortably in the future.

The booklet ranks each state’s performance in the four markers. In regards to overall child well-being, Maryland is ranked 21st of the 50 states. Maryland is ranked 13th for economic well-being, 19th for education, 28th for health, and 22nd for family and community. Economic well-being encompasses a child’s family’s employment statuses and wages, this has an effect on the parents’ abilities to invest in their child’s future. Families in poverty can also have detrimental effects on a child’s development and ability to succeed further down the line. Promoting educational well-being at a young age enforces strong educational goals for children as they grow older. There are also many socioeconomic factors that contribute to a child’s quality of education. Similarly, a child’s health is an important factor in their development and overall future success. Outside exposure to negative behaviors such as food insecurity, family stress, and lack of health care are severely detrimental to a child’s development both in and outside of the classroom. Along those lines, family and community are extremely important social factors that affect a child’s development. Having support family members and communities set up children for future success. An important approach to ending poverty tackles the parents’ and children’s problems simultaneously. Communities with strong support networks allow families within the communities to thrive. Some notable statistics from Maryland are that there are 205,000 children living in households that were food insecure at some point during the year from 2016 to 2018, roughly 15% of the child population.

Being food insecure does not equate to being hungry. Rather, food insecurity refers to a lack of financial means to secure food for a household. Hunger is a byproduct of food insecurity. Tackling food insecurity allows children to have one less obstacle to worry about. It is obvious that there are many factors affecting a child’s ability to succeed in the future. In order to set up our children for academic success, they must have a strong supportive community to help them achieve their goals. In 2018, Maryland had 409,000 children who were living in households with a high housing cost burden and 312,000 children had parents who lacked secure employment. Too many children are facing food insecurity, and there is a disproportionate effect of this problem on communities of color. It is vital for organizations such as the Baltimore Hunger Project to exist and continue addressing the invisible issue of childhood hunger in classrooms across the city.

In order to address food insecurity on a national level, the United States Department of Agriculture (USDA) has created several food assistance programs. One of their programs is the Supplemental Nutrition Assistance Program (SNAP). SNAP is catered for families that have low or no income, benefits are provided on a card that can be used to buy food at grocery stores. Another program created by the USDA is the National School Lunch Program (NSLP). According to the USDA’s website, in 2018 the NSLP provided lunch to 29.7 million children who qualified for free or reduced lunch. The USDA also has a Special Supplement Nutrition Program for Women, Infants, and Children (WIC). The WIC provides federal grants to states to buy supplemental meals for low-income pregnant women, breastfeeding women, and mothers of infants and children up to five years old who are found to be at nutritional risk. 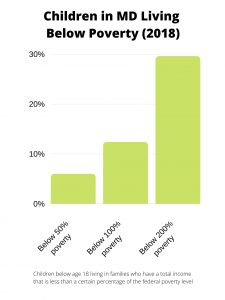 Due to the pandemic, several national organizations have altered their policies to help the surge of children and families in need of food assistance. The USDA has developed Feeding Program Partnerships with organizations such as the Baylor Collective on Hunger and Poverty, PepsiCo, and McLane Global. The USDA has increased SNAP benefits by 40% and expanded online grocery purchasing benefits for SNAP recipients. Although national organizations have been helping to combat the issue of food insecurity, there is still much more work to be done before the crisis can be eliminated. The BHP is doing its share by filling the weekend hunger gap left by students who qualify for free or reduced lunch. Students who rely on meals at school to fuel them throughout the week do not have access to those meals on the weekend. Through donations and outside support, BHP has been able to provide over 40,000 bags of food to Baltimore children.