What are Healthy Food Priority Areas?

What are Healthy Food Priority Areas?

In areas with high poverty rates, access to healthy and sustainable food is limited. Families that are struggling to make ends meet and have to decide how to allocate their earnings from multiple part-time jobs do not have the luxury of shopping or eating outside of their local community. However, these local communities also tend to have cheaper and unhealthier food options. Unfortunately, the close-proximity and low cost of such options are more attractive than driving 30 minutes to the nearest Whole Foods. Such geographic locations were formally titled  “food deserts.” As written by the Food Empowerment Project, these areas have “an overabundance of fast food chains selling cheap ‘meat’ and dairy-based foods that are high in fat, sugar and salt.” “Food deserts” tend to be most commonly found in suburban and rural areas, or areas with poor public transportation options. A notable statistic is that wealthy areas have three times as many supermarkets as their poor counterparts, while white neighborhoods contain around four times as many supermarkets compared to predominantly black neighborhoods. Re-evaluations of the term have recognized the negative connotations associated with “food deserts.” According to The Baltimore City Health Department “food deserts” suggest that there is no food, when there is in actuality an imbalance between healthy and unhealthy foods, and fails to acknowledge the progress achieved by those attempting to fill the “deserts.” Instead, the new term replacing “food deserts” is “Healthy Food Priority Areas.”

The Baltimore City Health Department defines a “food desert” as:

“An area where the distance to a supermarket or supermarket alternative is more than ¼ mile. The median household income is at or below 185% of the Federal Poverty Level. Over 30% of households have no vehicle available. The average Healthy Food Availability Index (HFAI) score for all food stores is low.” 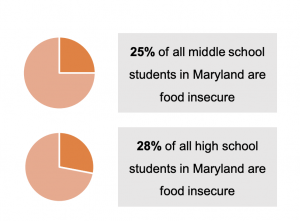 The definition is still the same for “Healthy Food Priority Areas.” A report published by Johns Hopkins University in collaboration with the Baltimore Food Policy Initiative revealed that “one in four of the city’s residents live in so-called food deserts with limited access to healthy foods.” Even though the study was published in 2015, there is still room for improvement for Baltimore as a city. In 2018, 23.5% of Baltimore residents lived in Healthy Food Priority Areas. The study also found that evidently, neighborhoods that were considered “food deserts” had higher rates of diseases linked to unhealthy diets, including diabetes and cardiovascular diseases. A relevant racial statistic was that 34% of African Americans were found to live in “food deserts” versus only 8% of white residents. Age also plays a contributing factor to Healthy Food Priority Areas–30% of Baltimore City’s school-aged children lived in such areas in 2015. Healthy Food Priority Areas are the main physical reason for why so many children are food insecure in Baltimore. The Food Insecurity Among Middle & High School Students in Maryland report recently released shows that all the counties in Maryland state have at least 20% food insecurity rates among high school youth.

At the Baltimore Hunger Project, our main mission is to stamp out childhood hunger. To do this, we must find solutions to deep-rooted societal problems, including Healthy Food Priority Areas. Food insecurity must be understood and addressed on a deeper level. By supporting the BHP, you are directly supporting a food insecure child. This school year, children should be focused on making the most out of their virtual learning environments, rather than trying to figure out where their next meal is coming from, or how their parents will choose between paying their rent or buying a nutritious meal.